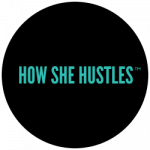 Founded by Emily Mills in 2010, How She Hustles is a vibrant network with a digital reach of more than 10,000 diverse women – we connect through social media and special events in Toronto, Canada.

For almost a decade, How She Hustles has hosted a range of buzz-worthy events including: a wildly popular women’s brunch, inspiring panels where women share their personal and professional journeys, a meet-up for diverse female entrepreneurs, a pop-up shop exclusively for women-led start-ups, and seasonal networking events. These events have sold-out consistently, with a guaranteed waiting list, and frequently trend on Twitter. Women attend to network, get inspired, and share tips on how to achieve success.

How She Hustles lead the creation of HERstory in Black, a digital photo series of 150 Black women as seen on CBC. The project attracted national press coverage, became a 1-hour TV documentary, lead to an unprecedented celebration at the CBC Broadcasting Centre, and earned the prestigious CBC President’s Award.

How She Hustles also created the Startup & Slay series sponsored by CIBC, which aims to create a space for diverse women to connect and learn from each other about how to be successful entrepreneurs in Canada. Learn about our upcoming #startupandslay digital video series launching on October!

Last year, How She Hustles hosted a roundtable with Canada’s Prime Minister Justin Trudeau about economic opportunities and entrepreneurship for Black women. The network was also behind a video tribute to Michelle Obama, former First Lady of the United States, following a historic meet and greet with her in Toronto in 2018.

The network’s primary reach is diverse women under age 40 who are rising corporate leaders and entrepreneurs in Toronto and the GTA. Event guests have included CEOs to Consul Generals, Olympians to media personalities.

Although How She Hustles is based in Toronto, the brand has a loyal following of women in different parts of Canada, the United States, Europe, Africa, The Middle East and the Caribbean.

For highlights of our work, see our videos and events pages.