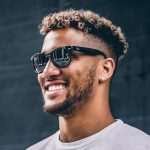 Randy Guine is a French actor and singer born in Paris.
Since 2015, He has worked for many professional Studios and Swiss National TV as Actor and writer. Project like “Studio Meuble” or Swiss comedy award winner “Carac Attack”.
With a theatrical background, Randy has been through acting film workshop and project.
In 2016 he started Stand up comedy and has multiple stages performances all around the world (France, Switzerland, Cameroun, Haiti)
He is now living in London where he studies Drama and regular takes an acting workshop and work with his agency Breakaleg management in order to pursue his big dreams.